March 1st marked the day of Matronalia. Matronalia was an annual festival of women originally held in ancient Rome. The Goddess Juno Luciana was worshiped to watch over married women and those in the throws of pregnancy. Women would often pray at Juno’s altar for a safe delivery and healthy child, for the gift to bear a child, and couples would pray to be blessed with a happy marriage. Throughout the day women, including slaves, were treated especially well. Husbands would give their wives gifts, and the women of the household would give the female slaves the day off and were allowed to participate in the feast that evening.

Matronalia may have eventually led to the celebration of Mother’s Day in Europe which spread globally, though Matronalia seems to have more of a focus on all women, or the Matriarchs of a household, instead of specifically mothers. In the United States, however, Mother’s Day is held in May and is celebrated in honor of the humanitarian work carried out by women during the Civil War. 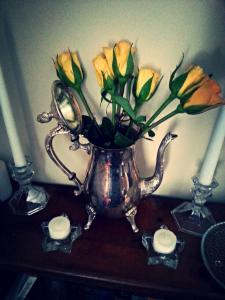 important women in their lives and Juno herself. Following are pictures from Luna’s altar. Six candles were placed to represent Juno and Jupiter and four important and influential women in Luna’s life. Yellow roses were placed on the altar because they are Luna’s mother’s favorite flower. The roses will later be turned into rose water for anointing purposes as they were asked to be blessed by Juno and Luna’s mother.

Each candle had the name of the person or deity represented carved into it using the Theban alphabet. Though this took some time, it seemed important for the candle to know who it was representing and to absorb the energy of the user. In the evening the candles were lit, and some meditation took place where the women were thanked.

Have you ever celebrated Matronalia? What was your experience?